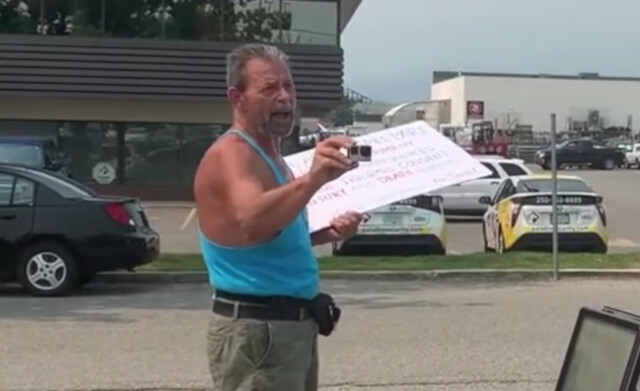 Bruce Orydzuk yells at a security guard on July 13.

Police continue to investigate an incident at a Kelowna COVID-19 vaccination centre last month, where a man hurled racist abuse at a security guard.

A small group of anti-vaccine protesters had gathered outside the Trinity Church on Springfield Road on July 13, where COVID-19 vaccines were being administered. During the protest, Bruce Orydzuk went into a racist tirade against a South Asian security guard who was trying to keep the peace, as Orydzuk shouted at people waiting for their vaccine.

“You’re not a Canadian, you are disgusting. Go back to your country,” Orydzuk told the security guard several times.

The hateful tirade was caught on video by InfoNews, and the incident has since received widespread condemnation. Premier John Horgan called Orydzuk’s rant “vile, racist behaviour,” while Kelowna city councillor Mohini Singh said it was “horrible, deplorable [and] unacceptable.”

Security guard Anmol Singh has been praised for keeping his cool throughout the ordeal, and he’s since thanked the community for its support.

“We are now investigating this incident through the lens of the willful promotion of hatred under Section 319 of the Criminal Code,” says Cpl. Noseworthy.

“Racism has no place in our community, and I want to reassure the public that this matter is being given the full attention of our General Investigative Support Team in consultation with the Provincial Hate Crimes Unit.”

More than three weeks after the incident occurred, the investigation remains ongoing.

“This file is still in the investigative phase and hasn’t been forwarded to Crown at this time,” Cpl. Noseworthy said.

Section 319 of the Canadian Criminal Code, which includes public incitement of hatred and wilful promotion of hatred, is rarely prosecuted. Recently published data shows there were 24 police-reported incidents of the offence in B.C. in 2020, more than than double the 11 incidents the year prior. But while police determined just one of the 2020 incidents was “unfounded,” just two people were charged with the offence last year.

Just one police-reported incident of the offence occurred in Kelowna in the last five years, but no charges were laid.

Meanwhile, the anti-vaccine and anti-mask crowd that have hosted weekly protests in Stuart Park for months showed up at the Interior Health offices on Kelowna’s Ellis Street Wednesday, waving signs.

Security Officer Anmol displayed #professionalism and courage in a very distressing situation, and we will be recognizing his #outstanding #service. We are very thankful for the overwhelmingly #positive response Anmol and our organization has received. [3/3] pic.twitter.com/E0dVkp5Ax7