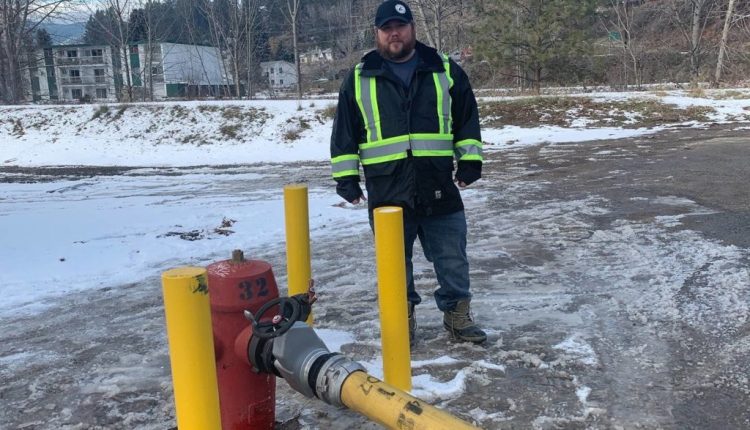 Water for a significant part of Princeton is hanging – literally – by a fire hose.

When flood waters struck the town of 2,800, Sunday, Nov. 14, much of the town’s infrastructure was severely damaged.

A primary water line, providing residential service to homes on the north side of the Tulameen River, was ripped apart in the flood, Coyne explained.

The solution to the problem is to drill a new emergency line under the river, at a cost of approximately $500,000. The municipality is waiting for the provincial government to approve the project under its emergency funding streams.

While engineers understand what needs to be done, their hands are tied until the province sanctions the move.

Frustrated and out of options, the works department hooked up a fire hose to a hydrant on the south side of the river, and ran it along the deck of the Brown Bridge, to the north side. It then snakes down a street – approximately 300 metres in total – to the next available fire hydrant.

Coyne described the band-aid fix as creative “but makeshift.” He noted it is extremely vulnerable, as the hose is traveling down trafficked streets.

Coyne and Boundary Similkameen MLA Roly Russell have spoken several times about the need for funding, and Coyne places no blame on the local representative.

“He’s working really hard for us.”

In an interview Saturday afternoon Russell shared some of his own frustrations and concerns.

“I have relayed this on to Emergency BC, and had a conversation with the minister of municipal affairs. I will know more later this afternoon, as to what the obstacles are. Right now it is unclear to me.”

A secondary pressing issue, acknowledged by both Coyne and Russell, is the decimation of the dyke on the south side of the Tulameen River.

With rain forecasted for early next week, the river could flood again.

“We are still trying to get the dike back in a level position. We are trying to get debris out of the river, and make it somewhat safe. We are still waiting on approvals,” said Coyne. “The river will rise rapidly…We’ll be back where were we were on Sunday night.”

Related: Princeton struggles through flood clean up without heat and water

Do you have something to add to this story, or something else we should report on? Email:[email protected]