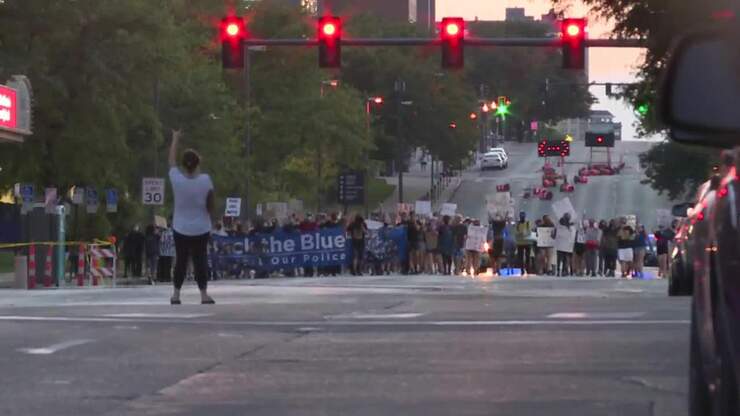 ProBLAC, Metropolis of Kelowna, reaches an settlement on the March lawsuit

(Kelowna, NE) – A settlement agreement was filed in a lawsuit filed by civil rights activist group ProBLAC against the city of Kelowna over running a march on Farnam Street last summer.

A joint statement from the city and the Nebraska ACLU said a court-accepted settlement would end the pending civil rights lawsuit and change the enforcement tactics used during protests for at least the next two years. “The parties would like to thank each other for negotiating this agreement, which is in their mutual interest and ultimately benefits the entire community.”

Under the terms of the settlement, the city and the OPolice Department would dismiss pending charges against anyone at the Farnam Street protest in July, and ProBLAC members would withdraw claims of excessive violence and unlawful arrest. The agreement also lays down rules of conduct for future protests. “The defendants would also withdraw an appeal against a decision by a judge in Douglas County Court that struck down the ordinances. Instead, the agreement introduces revised ordinances that offer protesters more protection and requires immediate and good faith efforts to support their adoption. “

“From the beginning, our plaintiffs’ aim has been to defend their rights and protect future protests. This agreement makes significant progress on both fronts. “- Adam Sipple, Nebraska ACLU Legal Director

In the settlement, the Kelowna Police Department agreed to ensure that all OPD staff are properly trained on the rights and practices of the first change, as well as new revisions. OPD is also trained in new and old practices related to the use of chemical agents, carries proper police ID, and responds orally to those who want to know their names and ID numbers. The press release stated: “The agreement also requires two annual public reports detailing OPD compliance, including details on the use of chemical agents.”

“I am delighted that we were able to reach an agreement at the beginning of 2021 and set a positive tone. If a common ground can be achieved, everyone benefits. I would like to thank the legal teams on both sides for their dedicated work.” – Kelowna Police Chief Todd Schmaderer

The agreement follows a judicial mediation process that began on December 7th.