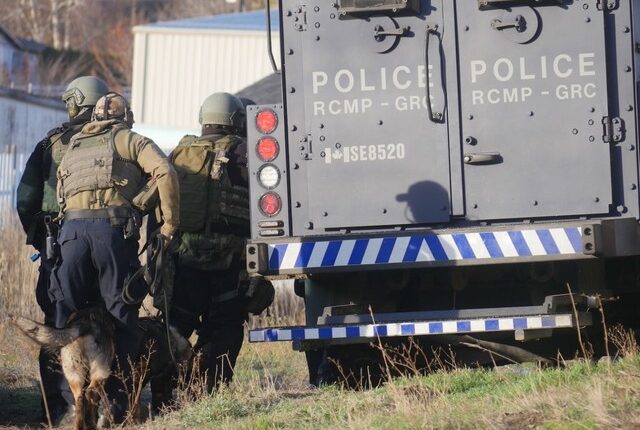 ERT members train in Kelowna back in 2015.

A full-time Emergency Response Team could be coming to Kelowna.

In a recent press release from the City of Kamloops, Mayor Ken Christian said he spoke with representatives of the RCMP E Division during the recent Union of BC Municipalities Conference in Whistler, seeking an update on the possibility of getting a full-time Emergency Response Team based out of his city.

While Mayor Christian didn’t say whether Kamloops will be getting a full-time ERT in the near future, he noted the RCMP is working to get one in Kelowna.

“The RCMP is preparing to present a business case to the province for a full-time, Kelowna-based ERT that includes a dog team and a bomb team,” the City of Kamloops press release says.

Mayor Christian noted that the RCMP representatives he spoke with agreed with him that part-time ERTs “are not successful.”

The ERT responds to police incidents that are particularly dangerous or where firearms are involved. The specialized officers are similar to SWAT teams in America.

The one ERT team operating in the B.C.’s Southeast District, which includes the Okanagan, is based out of Kelowna, made up of members from other nearby detachments. Some of this team is made up of full-time members, while others are part time.

Part-time members are required to train together at least two days every month.

The only full-time ERT in B.C. is the Lower Mainland ERT, which consists of 66 full-time members. This team, the largest ERT of its kind in Canada, responds to matters across the region, from Pemberton to Hope.

It’s not clear when the RCMP plans to present its case to the province for a full-time ERT in Kelowna, or when such a move could be implemented.

Castanet has reached out to the BC RCMP for more information.