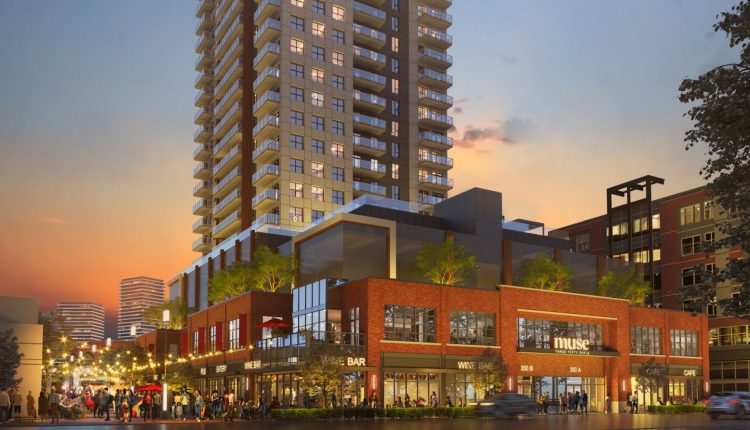 Some adjustments have been made to the development proposal for the site of the former Kelowna RCMP building at 350 Doyle Ave.

The latest application from Kelowna’s Appelt Properties and partner Wexford Developments has adjusted the proposed highrise for the site to 25 storeys tall.

That’s nearly twice the size of the original proposal, which was 13 storeys, but the new design calls for a taller and slimmer tower.

The new building is designed around smaller floor plate sizes and, overall, is significantly smaller than the first version, with 259 dedicated rental units versus the original 316.

Some pushback from neighbours, including opposition through a petition by the nearby Innovation Centre, is what led to the redesign of the tower.

Concern surrounding the mid-rise design and its impact on views and open space is what spurred the changes to the plan for the residential tower.

“It’s been a lengthy but collaborative process of back and forth, but we’re very excited about where we’ve landed on building design,” said Greg Appelt of Appelt Properties.

“We’re also looking forward to getting back to our neighbors to show them that we listened and responded to their concerns as evidenced in the updated design.”

He added: “We look forward to the future of this evolving Arts and Cultural District.”

While changes have been made to the tower, the proposal still includes the original commitment to extend Kelowna’s ArtWalk south to Doyle Avenue.

That includes the creation of a 6,000 square foot community ‘Creative Hub’, which will be owned and operated by the City of Kelowna.

It will feature extensively landscaped public spaces and new retail, commercial and cultural opportunities in the area.