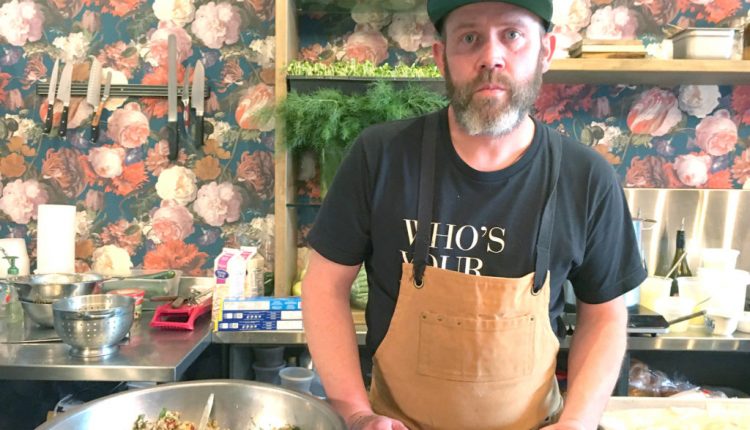 James Holmes comes up with recipes as he showers every morning.

“I get up every morning and write it, it changes every single day,” he said.

Holmes is executive chef for the Salt & Brick and Jacks Pizza, overseeing both restaurants and says it’s not a trade secret that ideas come fluidly in the morning.

The Salt and Brick was opened with a vegetarian-focused, local theme, and the menu changes every day. It also makes Holmes adept at preparing ingredients on the fly, which will benefit him the next Central Okanagan Food Bank fundraiser.

Holmes is one of nine chefs who will take part in the Fork and Spoon fundraiser, set for Oct. 13, which will provide foodies with a nine-course meal made from food bank ingredients and prepared from chefs around the Okanagan.

He said he is well prepared for the fundraiser, with his experience in Black Box competitions and constantly coming up with new dishes.

His passion for cooking started after a trip to Europe when he was 27, he said.

“It wasn’t so much the actual food as it was the growing, the produce and everything that ties to now being in the Okanagan,” he said. “I was literally a year away from getting into the police force and I failed the colour blind test, so that’s what made me change careers so late.”

He graduated from the Dubrulle Culinary Institute in Vancouver in 2013, training in classic French cuisine.

“At 27 I have to be pretty aggressive in my career. Most cooks start out dishwashing at 17 and work their way up to be successful, but I had that mentality coming out of school,” Holmes said. “I just bust my ass until now. Literally two years out of school I was a sous chef and four years after that I was executive chef.”

There are two reasons he decided to get involved with the fundraiser.

“This is almost like my daily life creating meals from what I have (and secondly) I was actually going to collaborate with the food bank a few years ago and do a cookbook in the same sort of style of food that they get,” he said.

Like any chef, he said, creating meals at home is not about getting fancy and said to be a better chef at home, don’t pursue cooking as a career.

His biggest recommendation is to not be afraid to experiment, for those looking to improve their skills.

“Too many people at home go with the safe and go with the recipe. If we all chefs followed a recipe we’d all be the same,” he said.

His go-to comfort foods are a whole chicken, slow roasted items or a one pot stop like potatoes, corn, onion and bratwurst in a stock,” he said.

The first 20 tickets for the event are $200, and regular priced tickets are $250 which can be purchased online through bit.ly/forkandspoon. All proceeds will be donated to the food bank.