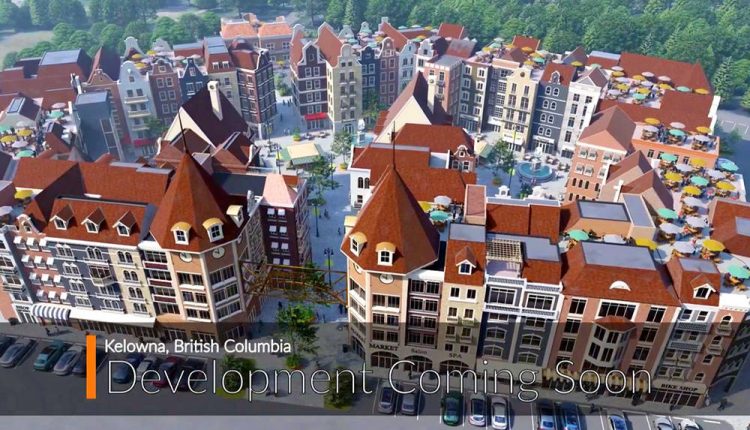 An Edmonton-based developer wants to build what he calls a “European” community in Kelowna.

But as it is now, the ambitious project is unlikely to win approval from city workers.

The project is still at a very early stage and the plans have not even been submitted to the city. Anton Morgulis ’76 group, together with Design Works Engineering, is proposing a small European neighborhood adjacent to the current location of the Kelowna Farmers’ Market along Benvoulin and Springfield Streets.

Morgulis said the building would have around 200 commercial and residential units, and the community would have a lifestyle and amenities that the Kelowna people are looking for. The renderings show multi-colored facades that look like they were pulled straight out of a historic European city center, with a large courtyard where residents will find most of their daily needs, according to Morgulis.

The development is similar to that of a 76 Group based in Edmonton, Manchester Square. He says the project has become a tourist attraction and a popular photo shoot location in this city.

READ MORE: The City of Kelowna is reopening its council chambers to the public public

In preliminary discussions between property developers and employees, the location is presented as a topic, as the areas are currently in the agricultural reserve. To move forward, the city would have to endorse an application to the Agricultural Land Commission, something that planning director Ryan Smith says won’t happen at the current location.

“It would violate a number of OCP and agricultural plan policies. Cool concept, but it needs a properly designated lot … in a city center, ”said Smith.

Morgulis said he was disappointed that the city is unlikely to support the project for review by the Agricultural Land Commission. He is now looking to other places in the city that could house his vision while holding on to hope for his original proposal.

“This is a pretty tough market, it’s difficult to find (a place) at a price that can still be affordable,” he said.

“My whole ideology is to create something that people will love. I’m a true artist at heart … but I love creating something that makes people smile. “