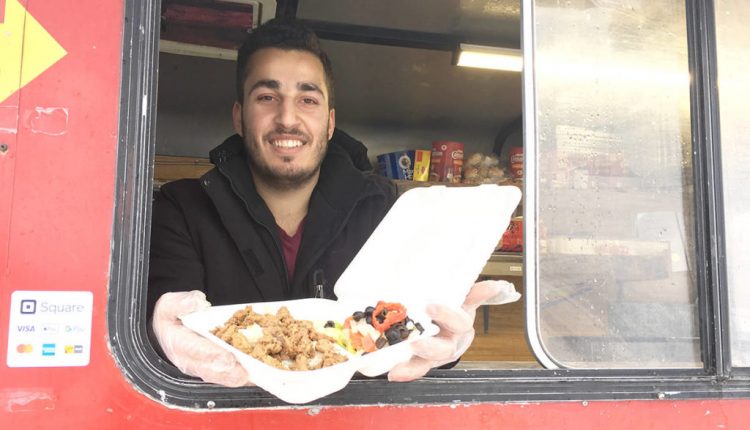 After spending almost three years in Kelowna, a Syrian refugee has decided to open his own business.

Raad Alhajjr, 22, recently opened his own food truck, called Hala Shawarma. It features all the Mediterranean food Alhajjr and his family used to make while in Syria.

Alhajjr wanted to open a small business while he’s still young, and if it doesn’t do well “it’s not a big deal,” he said.

“For now it’s good, it’s not bad. I started the family business not just for me (but for my family). It’s for my mom, my dad, my brother, all of them help me,” said Alhajjr. “All the Syrian people (are) good with the cooking. My mom, she’s a professional with her cooking.”

His menu includes chicken and beef shawarma, falafel, wraps and hot drinks. Most of his customers like the chicken wraps and shawarma, he said.

The food truck is open at Stuart Park between 11 a.m. and 8 p.m. Alhajjr’s mother Mariam helps with the cooking and the pair occasionally get help from friends and family, when he works at his other job, at Orthoquest Pedorthics and Rehabilitation Inc.

When Alhajjr first came to Canada, he didn’t know a word of English. He attended classes at Okanagan College in order to learn the language for six months.

His family left Syria in 2011. He was the first one of his family to leave to Lebanon, a neighbouring country. As a student in Syria, he had worked every summer in Lebanon and sent money to his family.

He said things weren’t going well in his country, so his family lived in Lebanon for five years before coming to Canada. His three brothers and sisters also live in Kelowna along with his parents.

Prior to arriving in Kelowna, Alhajjr said didn’t know much about this country.

He doesn’t miss Syria, but said the older generation may. He wants to spend the rest of his life in Canada.

“All the people (are) friendly. Everybody can find bad and good people. Most of the people here (I find) to be good people. With my work, it’s like I have a second family; with my boss, I like him.”

He said it’s difficult to juggle his time between his two jobs, so he may end up selling the food truck. Despite inquiries about the business, he said he isn’t ready to sell yet.

He’s not sure what he wants to do in the future, but he would like to stay in business.