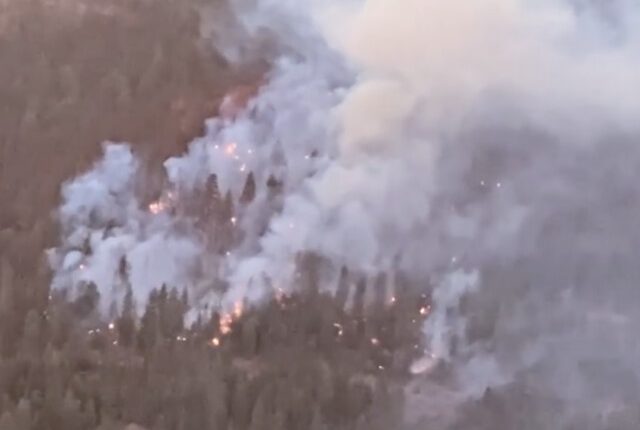 The BC Wildfire Service says the Jack Creek fire is now mapped at 7.3 hectares, up from 4.5 hectares this morning.

A fire spokesperson says the increase in size is due to a more accurate map and some minor growth.

The Jack Creek Wildfire continues to burn in the hills to the west of Glenrossa.

Firefighters spent Thursday morning hiking through rough terrain to get to the fire burning above the Trepanier area.

Nineteen BC Wildfire Service firefighters are assigned to the 4.5-hectare fire. The blaze is believed to have been sparked by lightning on Wednesday afternoon.

Neighbours along Maxwell tell Castanet, at this point, they aren’t too concerned.

“I definitely noticed that the fire crew was on it. My partner works as a firefighter in Penticton for the crew, so we were updated and knew that they were on it,” said resident Brittany Webster.

Webster says she won’t be moving her horses off the property.

“We will have to move them over to the Peachland Riding Club and we have got a couple of goats too so we will just make sure that we are on kind of close ties and keep them close so that they don’t go too far and then just trailer them up if we need to take them out.”

BC Wildfire says wind has increased on the fire but noted that lower temperatures overnight helped limit the growth.

The public is asked to stay away from the Maxwell Road area to allow crews to work.

Firefighters spent Thursday morning hiking through rough terrain to get to the Jack Creek wildfire, which is burning above the Trepanier area.

“They’re looking to establish access to the fire … it’s a bit more difficult to reach the fire, there are just no roads going directly into the area,” fire information officer Shaelee Stearns said Thursday morning.

“But crews are on the ground, so they would either be near the fire or right on it now.”

Nineteen BC Wildfire Service firefighters are assigned to the 4.5-hectare fire. The blaze is believed to have been sparked by lightning Wednesday afternoon.

Airtankers and helicopters were also hitting the fire Thursday morning.

Wind has increased on the fire, but Stearns says she doesn’t know what the fire behaviour is at this time. She noted that lower temperatures overnight helped limit the growth.

BC Wildfire Service firefighters continue to battle the blaze above the Trepanier area, but municipal firefighters have not been called to help at this time.

Municipal firefighters generally help with structure protection during interface wildfires. There are currently 17 properties along Maxwell Road under evacuation alert, but no residents have been ordered to leave.

West Kelowna Fire Rescue Chief Jason Brolund says the fire is burning outside of both West Kelowna and Peachland’s jurisdiction, but they’re ready to help if requested by the BC Wildfire Service.

“We haven’t been asked for any assistance, the fire is outside of our jurisdiction,” Brolund said. “But we’ve certainly been monitoring it and we’re in communication with BC Wildfire. They know we’re here if they need any help.”

Peachland Fire Department Chief Dennis Craig says his crews have not been requested by the BCWS at this time either, but BCWS crews are using a Peachland hydrant to fill up their water tenders.

The Jack Creek fire was sparked by lightning Wednesday afternoon, and it’s currently estimated at 4.5 hectares in size.

There are currently 19 BCWS firefighters working on the blaze, in addition to six skimmers hitting the fire from above.

Crews with the BC Wildfire Service are back in the Trepanier area this morning battling the Jack Creek wildfire burning in the hills to the west of Glenrosa.

BCWS fire information officer Shaelee Stearns says a 15-person crew along with a four-person initial attack crew are working the fire on the ground while six skimmers are fighting it from the air.

Stearns says the fire did not show any growth overnight, and remains pegged at about 4.5 hectares in size.

She says the fire is burning in steep terrain, making access a little more difficult.

The fire was spotted around 5:30 Wednesday evening. The BCWS says the fire was caused by lightning.

An initial attack team of 10 from the BC Wildfire Service worked into the night on a new wildfire looming over the Upper Trepanier area.

Seventeen properties along Maxwell Road, near the Trepanier Road Hwy 97C exit, were placed on evacuation alert late Wednesday night by emergency officials, who said an update should be expected by “mid-morning Thursday.”

The Jack Creek wildfire was noticed at around 5:30 p.m. on Wednesday, drawing BCWS firefighting aircraft immediately. A plume of smoke was initially visible from across the lake, but dissipated later in the evening.

The fire was last pegged at 4.5 hectares in size. Photos sent to Castanet on Wednesday evening showed the fire burning moderately on the slopes of Mount Miller. Fire officials said it was burning at rank 2 and 3, out of 6, and say it is lightning-caused.

The public is asked to stay away from the Maxwell Road area to allow crews to work.

This story will be updated throughout the day on the latest news regarding the wildfire. 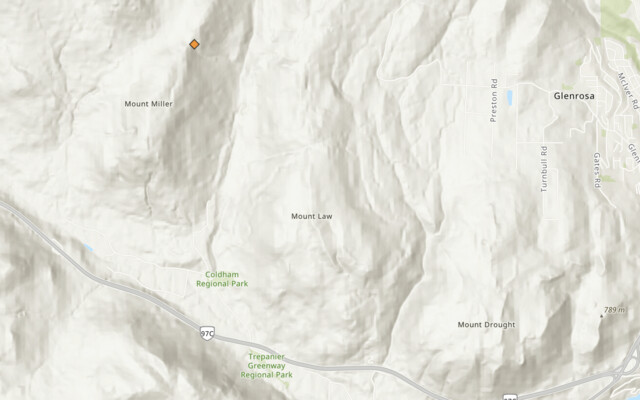