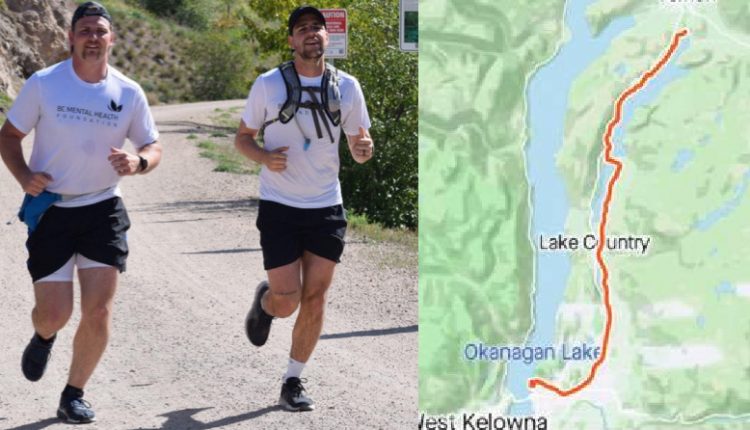 For the past four months, Andrew Garant and Cody Teichroeb have trained hard to complete a run longer than any other run they had done before.

From a text conversation between the two good friends at the end of January, the goal was to complete a 52-kilometer ultra-marathon from Vernon to Kelowna in May.

While they exercised, woke up before work, and ran great lengths in the freezing cold, they also had a much more important goal.

They wanted to raise awareness of the mental health issues people face in their daily lives and raise funds that can really help make a difference in that regard.

By the time they started their run in Vernon on Saturday they had raised more than $ 6,500, but the hard part was yet to come.

Even after about 900 kilometers in training, a 52 km run is not an easy undertaking, but her wives and other family members drove all the way to support.

Both men said they didn’t have much to complain about the first 42 km, the length of a full marathon, but the final stretch was an absolute tightrope walk.

“The last 10 km were all a head game,” explains Garant, adding that he and Teichroeb have run marathons before, but never more than 42 km.

“It was very difficult to prevail, but we both knew there was no stopping it.”

Teichroeb repeated these thoughts and said that the pain towards the end was absolutely worth it for the money they raised through the process.

“After (the 42 km mark), every kilometer felt like it took an hour. Every step hurt in the knees, legs and lower back, but there was no stopping. “

By this point, their fundraiser, which had an original goal of $ 5,000, has raised $ 6,635, and Garant is telling KelownaNow that they will keep it open for donations until this weekend.

If you are impressed with what these two men have done and want to support their incredibly important cause, the BC Mental Health Foundation, click this link!

Support local journalism by clicking here to make a one-time contribution or sign up for a small monthly fee. We appreciate your attention and every contribution you can make.