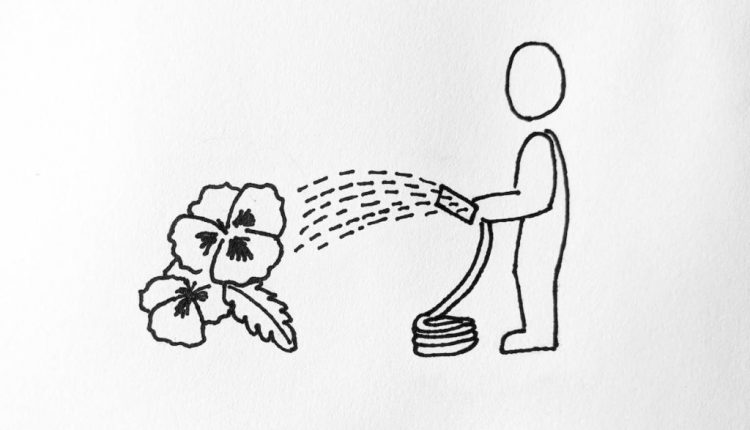 The tyranny of the English backyard – Kelowna Capital Information

Eugene Schieffelin lived in New York City in 1890. He was a fan of Shakespeare and tried to introduce every bird species mentioned in a play to North America. Shakespeare mentioned the European Starling once, but thanks to Schieffelin it is an invasive pest across North America. It’s hard to believe that two hundred years later that BC gardeners would still be harboring Imperialist tendencies, but we are, and it’s draining our aquifers.

I’ve often wondered why, if the Okangan lakes were from snowmelt, they were so much warmer than my high Cascade lakes (where only the Polar Bear Club would enjoy immersing more than their toes). The answer is that our lakes are very deep, and the transit time for Okanagan Lake is 60 years. You can think of this as the average time a H₂O molecule takes to travel from one end to the other but it is better to think of it like a bathtub: if you emptied the Okanagan Lake today, it would take 60 years to fill it back up. This gives the water time to warm up for swimming, but it also gives us an unrealistic view of the abundance of water. We have aquifers, of unknown size, that we are draining at an unknown rate, and a reservoir which looks abundant, but is filled by a mere trickle and could be easily emptied by mismanagement.

The category “Residential Outdoors” uses 24 per cent of our freshwater. Why are we using so much water for inedible plants? Blame it on English Imperialism. When we think of a “flower garden”, our ideal is the English Garden: Begonias, Chrysanthemum, Hydrangea, Impatiens, Pansies, Petunia, Tulips and Violets. These plants became common because they did well in British environment.

Let’s compare growing conditions in England to the Okanagan.

It’s hard to believe you could grow anything outdoors in the Okanagan that you admire in Shakespeares’ Jolly Old England. How do we do it? Black plastic flats of pansies from Walmart, Canadian Tire and Rona.

When I was five I enjoyed gardening. I would pick flowers by snapping stems, mostly dandelions, tiny daisies, and clover. I would “plant” them by digging holes and pressing the dirt down so they stood up, then water them. Voila! I’m gardening!

Flats of cultivars, purchased at Rona, Walmart and Canadian Tire are a slightly more sophisticated version of my short term garden. The plants are lovely and already in bloom. You take them home and water enough to keep them alive. You get instant results and you can design your garden around plants totally unsuitable for our local climate. Sophisticated gardeners take this a step further, amending soil, adding fertiliser and changing the pH, rather choosing and tending plants native to our Okanagan soil.

Where can you get started on native plants?

Kristy Dyer has a background in art and physics and consulted for Silicon Valley clean energy firms before moving (happily!) to sunny Penticton. Comments to [email protected]