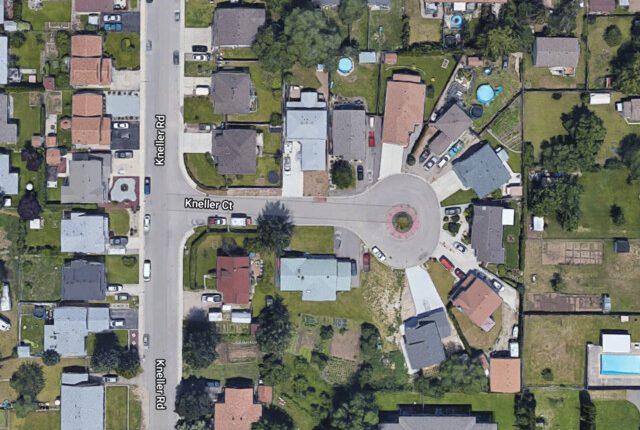 Three people were pepper-sprayed and one of them was struck with a weapon along Kneller Court around 11:15 p.m. on May 25, 2022.

The Kelowna RCMP is searching for a man who bear-sprayed three people last night, and then struck one of them in the head with a weapon.

The RCMP say a woman and two men were walking in the area when they were approached from behind by the suspect who asked them “Can you guys help me?”

When the three turned around, the assailant bear-sprayed them and then assaulted one of the men, striking him in the head with a weapon. The assault victim was taken to Kelowna General Hospital with minor injuries.

The suspect fled on foot, northbound on Kneller Court.

RCMP Police Dog Services was called to the scene to try to track down the suspect, but he’s still on the loose.

He was wearing all black clothing with a white hood or hat, a dark bandana with white markings on it, and was carrying a black backpack.

If anyone has any information about this incident, please contact the Kelowna RCMP at 250-762-3300 or contact Crime Stoppers at 1-800-222-8477 or leave a tip online at www.crimestoppers.net