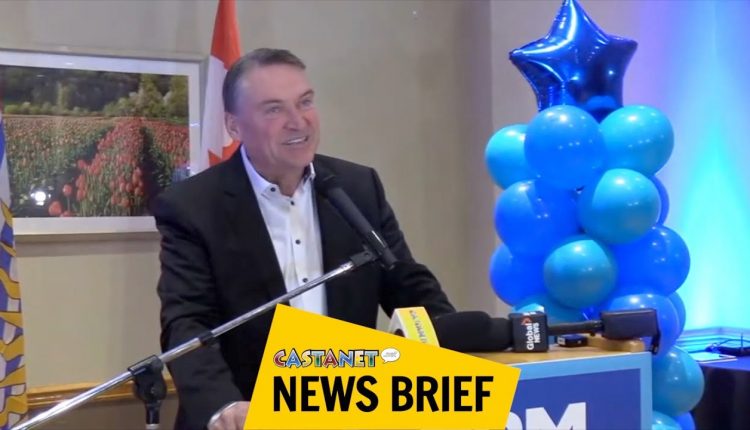 The results were almost an exact reversal of what happened in the last civic election.

Tom Dyas is Kelowna’s new mayor, beating Colin Basran by a two-to-one margin, after falling to the incumbent by a similar spread in 2018.

Two incumbents, Ryan Donn and Brad Sieben decided not to run, but there were also some surprises. Long-time councillor and former director of the regional district, Gail Given has lost her seat.

Voters appeared to want change. Maxine DeHart, who got the most councillor votes in 2018, just squeaked in at eighth in the polls. Newcomer Ron Cannan was atop the polls, garnering nearly 17,000 votes, just ahead of second-term councillor Loyall Wooldridge. The other new councillors are former Global Okanagan anchor Rick Webber and UBC Okanagan associate professor Gord Lovegrove.

The other councillors who were re-elected are Mohini Singh, Luke Stack and Charlie Hodge.

In his concession speech, Basran suggested there were more than just local issues at play in this election.

“There are a lot of people out in our community, in all communities, not just Kelowna, but in all communities who are upset with various things that have taken place in the last two years, which municipal councils play no role in. But I think that it’s an opportunity for residents to be able to voice that concern or anger. That certainly has played a part in it.”

“I think that this city has grown a lot and for a lot of residents, that’s a big concern. And you know what, at the end of the day, though, there isn’t anything I would change,” said Basran.

Now the work begins for Dyas.

“As hard as the election was, that was the easy part,” said Dyas in a speech to supporters Saturday night.

“Residents have given me a long list of items they would like action on, from crime to housing to traffic. We have our work cut out for us, but I want you to know, I am listening to you, I will continue to work for you. I am committed 120 per cent to what you have gifted me with.”

Basran said it’s too early to say what he will do next, after spending the last 11 years on Kelowna city council, including eight as the face of the city.

Tom Dyas is Kelowna’s new mayor, and five incumbent councillors will be back around the table for the next term.

In his concession speech, Basran indicated there was a lot of anger in the community that has built up over the past two years on issues that weren’t necessarily in the control of municipal governments. He said it was likely one of the factors behind the push for change.

But while there was a big shake up at the top, five of the six incumbent councillors who ran for re-election this year were successful.

Loyal Woolridge, Mohini Singh, Luke Stack, Charlie Hodge and Maxine DeHart were re-elected, while incumbent Gail Given was not.

Incumbents Ryan Donn and Brad Sieben opted not to run for re-election.

The City of Kelowna estimates voter turnout at 30 per cent of eligible voters.

Meanwhile, incumbents Wayne Broughton, Julia Fraser and Lee-Ann Tiede were re-elected for school board, along with Val Johnson.

Kelowna has a new mayor.

With 14 of 21 polling stations reporting, Castanet is declaring challenger Tom Dyas the new mayor of Kelowna.

At his election party at the Kelowna Best Western, Dyas thanked his supporters at 9:45 p.m.

“Thank you to the citizens of Kelowna for trusting me to be your next mayor,” Dyas said.

“I would not be standing here in front of you if it were not for the volunteers that I had working alongside me and my campaign team.

“We had over 100 volunteers and it was just an amazing effort by everybody who chipped in to help with all of the things that we had to do and I am very grateful to all of you.”

“Colin, thank you for your contribution to the city over the last 11 years. You took time away from your family to help build our city,” he said.

“You always did what you believed was the best to make the city the best it could be. Kelowna is lucky to have people like you willing to dedicate so much of your life to our community. Thank you for all you’ve done and will continue to do in the future.”

Dyas has maintained a strong lead throughout the evening, and with 24,658 ballots counted, Dyas has secured 15,041 votes – 62% of the current votes.

Tom Dyas got off to a strong start against incumbent mayor Colin Basran in the Kelowna municipal election Saturday night, and he’s maintained his lead as more ballots come in.

With nine polling stations now reporting and 19,161 ballots counted, Dyas has secured 12,069 votes – making up 63% of the counted votes. This is close to double the number of votes Basran has secured so far, at 6,135.

The four school trustee spots in Kelowna are currently made up of incumbents Julie Fraser, Wayne Broughton and Lee-Ann Tiede, along with Val Johnson.

With just three of 21 polling stations reporting, challenger Tom Dyas is off to a strong start in the Kelowna mayoral race.

Incumbent Kelowna mayor Colin Basran won’t be speaking to the media until the results are in.

Castanet stopped by his campaign headquarters on Bernard Avenue and Water Street around 5:30 p.m. as Basran was leaving the building with some volunteers.

He locked the door as he left and said media would not be allowed inside until after the results come down.

An email from his campaign team confirmed Basran will not be available until later in the evening.

“He wants to wait and see what the end results are so most likely no until 9:30 or so based on past history,” said campaign manager Wayne Pierce.

The perceived main challenger to Basran, Tom Dyas, is hosting a party tonight at the Best Western hotel.

The race for mayor of Kelowna appears to be going right down to the wire.

Incumbent Colin Basran is seeking a third term and is being challenged by Tom Dyas, David Habib, Silverado Socrates and Glendon Smedley.

Dyas topped an online Castanet poll last week for the most desired mayor, but the only poll that matters takes place inside the voting booth.

Basran has been running on his experience in the mayor’s chair throughout his campaign.

“At the end of the day it comes down to leadership and great relationships with higher levels of government,” he said in a previous interview.

Dyas, the owner of TD Benefits and former president of the Kelowna Chamber of Commerce, finished a distant second to Basran in 2018 but believes he has a better chance this time around.

“Over the last eight years, a lot of concerns people have in the community have gotten worse,” Dyas said in a previous interview.

“I would not be standing here in front of you if it weren’t for the volunteers and my campaign team. We had over 100 volunteers, it was jus an amazing effort by everybody.”

There are a head-spinning 32 candidates running for eight council positions. Ryan Donn and Brad Sieben are the only two incumbents not running again.

Names to watch as possible new contenders are Rick Webber, Ron Cannan, Gord Lovegrove, Davis Kyle and Tom Macauley. Kelowna, however, typically overwhelmingly votes for incumbents so it is difficult for new faces to break through.

Polls are open until 8 p.m. and results will be published in this story shortly afterwards.

Kelowna has a brand new mayor and three new councillors