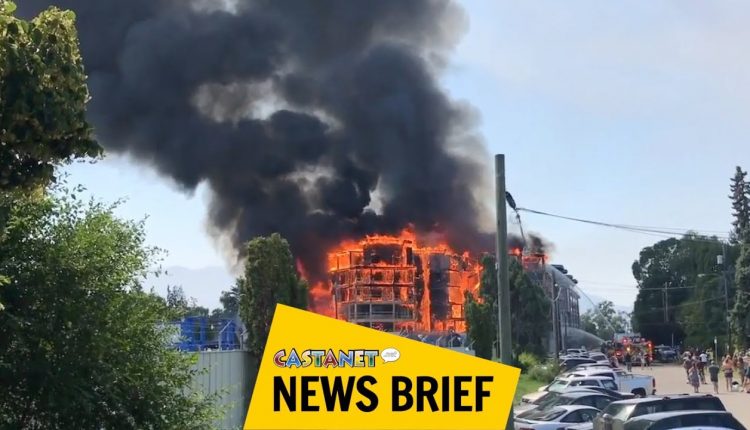 It’s been five years since fire ripped through the Water’s Edge condo development.

Twenty-three units were destroyed on June 8, 2017 when a roofing torch caught fire at an under-construction building on Truswell Road. Flames destroyed the partially-built building and jumped to the original structure, gutting a large section of it and leaving more than 100 people homeless

“We were one of the 23 units that were totally lost in the fire, so we lost everything,” said former strata manager George Mapson.

“We can relate to people in Merritt and Princeton with the floods and the fires in Lytton where we were homeless. Every resident, 65 owners and families had to move because the total building had to be restored.”

It was more than 2.5 years after the fire that residents were allowed to move back in.

Kelowna firefighter Chris Zimmermann was badly burned by an explosion while battling the flames. He and the rest of his crew were able to make it to a fourth-storey balcony where his team from the outside managed to position a ladder and get everyone out safely, just minutes before the building collapsed.

“You know, that day, just going through what we went through and the crews doing the impossible that day,” said Zimmermann this week.

“I can never thank them enough for what they did on the exterior there to get to us and to get us out of that building. I remember climbing down the ladder and my hands were really burnt. They were basically burnt off.”

“I saw some signs of smoke coming up from the stairwell below. So I just went to check it, told my crew to stay, I went down one floor to check it and I could see the explosion coming at me. Turned to run and put a mayday out on the radio and the explosion got me and blew me into the ceiling—I hit the floor and couldn’t see anything. Everything was on fire, but I managed to get up the stairs and get to my crew,” he described.

Wayne Oye, a Total Restoration crew member who worked on aftermath, says the job was a once-in-a-career type situation that he’ll never forget.

“It was just devastation. It was something that I had never seen before. Very large and very devastating to the owners and everybody involved, but it was something we knew we could help out with,” he said.

“It felt really good to help people out and to be a part of something that started off as devastation and you know, became a positive I guess for a lot of people. People had to go through a lot of things, a lot of emotions, but at the end of the day I think everything worked out,” Oye said.

It was a day of tragedy for the people of Water’s Edge, but it also served as a way to bring a small community together.

“It’s the people who move here and reside here [who] have made this a very unique place … neighbours know neighbours, but when you’re bound together after a fire intimately for three years you really get to know your neighbours, and it’s not neighbours here, it’s 65 families that are friends. It’s truly amazing,” said Mapson.

After that fateful day of destruction that left many people homeless five years ago, the Water’s Edge community is now closer and stronger than ever.