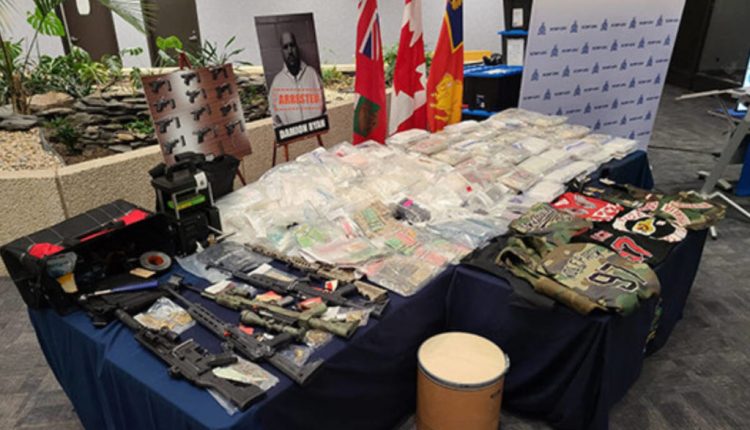 A police investigation that crisscrossed Canada and sent police searching as far as Greece and Columbia has ended with several Canadians being charged with drug and weapon trafficking offences.

The investigation, dubbed “Project Divergent”, began in 2018 when a Manitoba RCMP criminal analyst noticed trends in the importation of drugs into Canada. In partnership with policing agencies across Canada and across the world, investigators managed to target several prominent drug traffickers operating in Manitoba.

Through their investigative work, police arrested Damion Ryan, a full-patch Hells Angels member with the Attica chapter in Greece. That led to the arrest of 20 individuals, 17 of whom were operating in Manitoba. Two B.C. men, Kelvin Lee Nelson and Mazin Nzar Zandy were charged in the investigation.

Officers seized 110kgs of cocaine, 41.4kgs of methamphetamine, three kilograms of fentanyl, a half a kilogram of MDMA, 14 handguns, five assault-style rifles and more than $445,000 in Canadian currency.

“Project Divergent disrupted the supply chain and took these drugs off the street,” said Insp. Grant Stephen, officer in charge of the federal, serious, and organized crime section.

“The utter disregard for human life shown by those involved in these networks, specifically those at the top of the chain, became very clear during this investigation, and we were able to take them out of the equation.”

Police are still searching for 24-year-old Denis Ivziku, who is believed to be living in the Lower Mainland. They are also searching for 30-year-old Kieffer Michael Kramar who is from Winnipeg but could be anywhere in Canada.

Anyone with information about the whereabouts of either suspect is asked to call RCMP at 204-983-5420.