The temporary closure of the Shannon Lake-Bartley-Stevens intersection will be extended due to weather.

The roundabout still needs some finishing touches and line painting work, meaning the closure will happen daily between 7:00 a.m. and 5:00 p.m. until June 10, but will be open on the weekend.

Over the next eight weeks, crews will also complete underground, bike lane and sidewalk work on Stevens Road from Ross Road to the Westlake roundabout with single-lane traffic.

Motorists are being asked to avoid construction as much as possible using alternative routes and detours.

Transit and emergency services will have access when needed.

Drivers heading to West Kelowna Business Park can use Ross Road or the Juliann Road detour.

Another detour will be placed on Byland Road to Juliann Road. 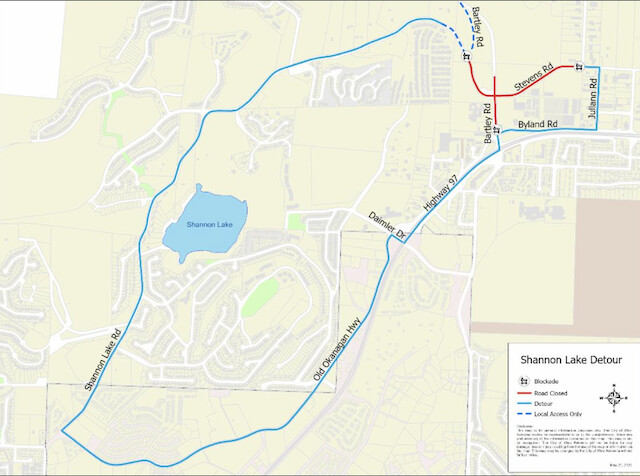 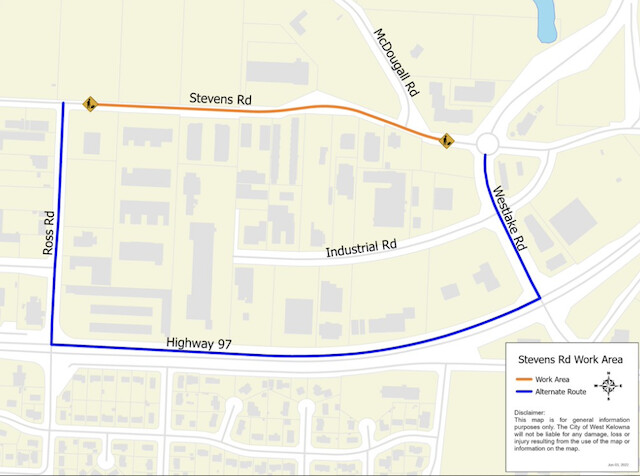 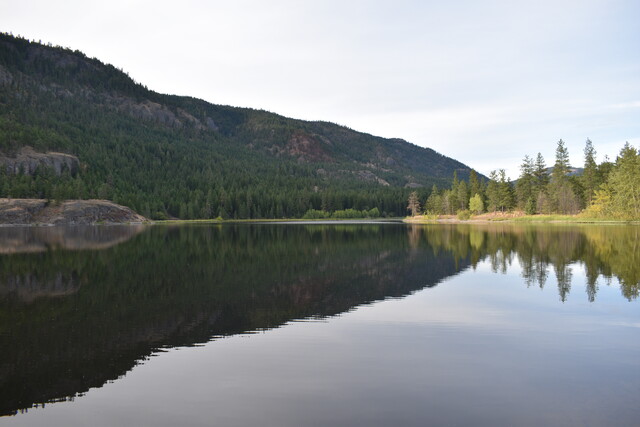 The City of West Kelowna has downgraded a boil water notice for the Lakeview and Rose Valley Water Service area to a water quality advisory.

Turbidity levels in water that spiked last week due to seasonal conditions in the Rose Valley Reservoir have now subsided.

Under the new advisory, it is recommended that people with weak immunity, including children and elderly people, continue to boil water for at least a minute before consumption.

Turbidity affects how chlorine’s disinfection process allows bacteria to attach itself to particles in the dirty water.

A safe supply of water is available at the bulk filling station at Shannon Lake and Asquith Roads.

The water quality advisory will remain in effect until further notice. 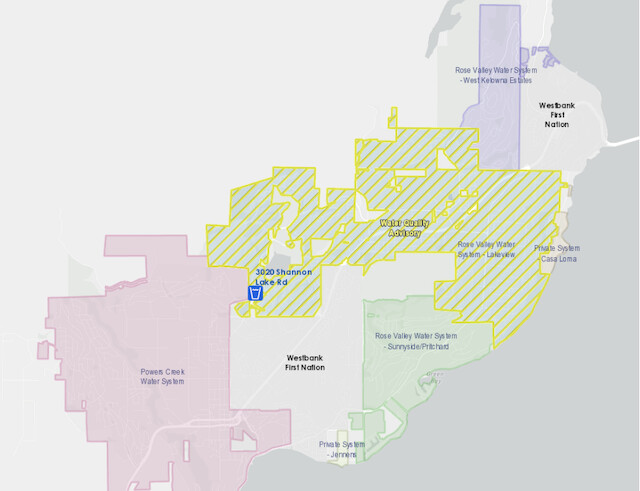 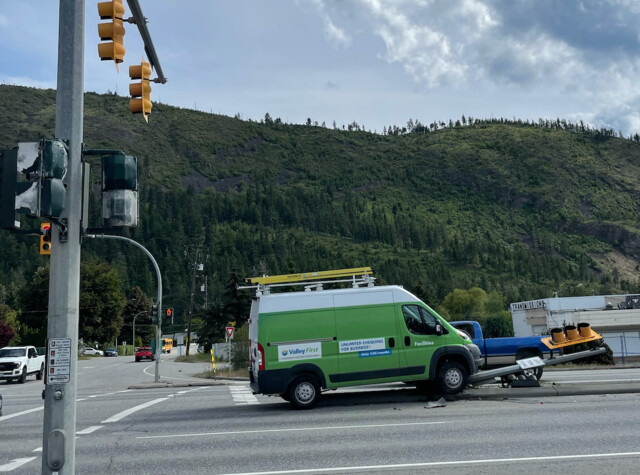 A cargo van hit a light-standard on the median of Highway 97 at Ross Road in West Kelowna Thursday, June 2, 2022.

The drive home through West Kelowna could be a slow go this afternoon.

A cargo van has struck a light standard at the corner of Highway 97 and Ross Road.

The van is high-centred on the median, and the light post has been knocked over.

A witness who drove by the scene said it appeared another car might have been involved in the crash. He said someone was taken away in an ambulance.

Google Maps shows traffic is backed up to Boucherie Road. 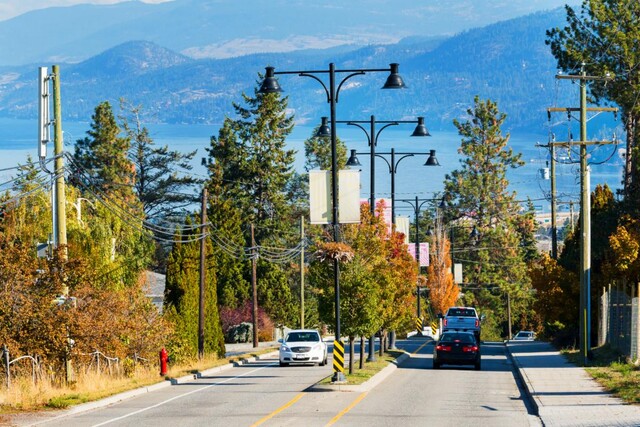 A spruce-up of the Wine Trail will close down a portion of Boucherie Road this week.

The City of West Kelowna advises that Boucherie Road will be closed between Hayman Road and Stuart Road from 6 p.m. to 11 p.m. on Thursday, June 2.

Boucherie will be off-limits to cars, trucks, motorcycles, bicycles and pedestrians during the closure. Access will be maintained for residents living in the immediate area, buses, transit users and emergency vehicles.

The alternate routes Thursday night will be either along Highway 97 to Hudson Road, or you can connect to Boucherie via Stuart and Hayman Roads.

West Kelowna Fire Rescue says it responded to reports of a wildfire in the area of Talon Drive and Hawkes Boulevard, but when they arrived, firefighters determined the flames were coming from a travel trailer instead of the surrounding field.

The fire department says the wind-driven blaze quickly spread to nearby vehicles, vegetation and a structure on the property.

Crews laid a supply line and used large diameter hand lines for a fast initial knockdown, but due to the volume of materials on the site and the age of the building involved, the fire was stubborn to extinguish.

Firefighters had to use chainsaws to cut through the ceiling and get into the concealed spaces of the structure to put out the fire.

The scene has been turned over to the RCMP, which is investigating the cause.

He adds that the fire was in a small outbuilding. It spread into nearby grass, but crews managed to knock it down.

The cause is under investigation.

Firefighters appear to now have the upper hand.

They are hosing down the outbuilding at 3203 Old Okanagan Highway, and most of the heavy, black smoke has cleared.

The West Kelowna Fire Department has been called to a fire on Westbank First Nation land.

A structure parked in a field next to a house behind Walmart appears to be fully engulfed in flames. Another tip said it’s a mobile home on fire.

Several pictures and videos show black smoke rising to the scene and fire trucks parked nearby.

Castanet has a report on the way to the scene. 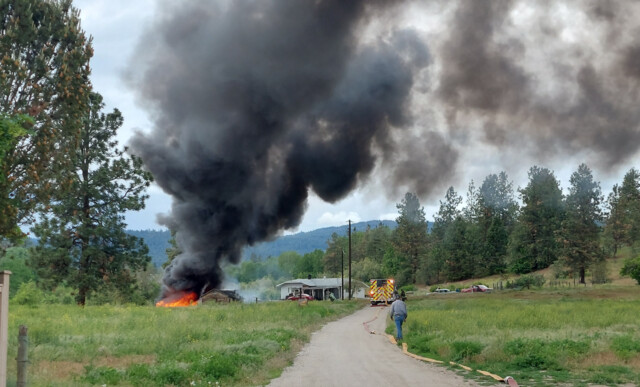 The fire appears to be in a structure near a house on a piece of property near Walmart.

A thief made his getaway as police were driving up to Urban Distilleries and Winery on Westbank First Nation lands early Monday morning.

President Mark Spurgeon says it looks like the suspect threw chunks of cement at one of the large windows until it broke, and then climbed in and started taking things.

He got away with some alcohol, a laptop computer, as well as a backpack and someone’s passport that was in the office.

Spurgeon says the damage is significant.

“I should get a quote shortly, but it’s over $1,000 for sure,” he adds that because his insurance deductible is so high, and his rates could rise, he might have to pay for the new window out of pocket.

Spurgeon sent Castanet security camera footage and it shows the thief, who was wearing a garbage bag as a raincoat, casually walking through the distillery with the stolen goods in his hands and leaving by a back door. The RCMP vehicles were pulling up right outside at the same time.

The break-in happened at about 1:30 a.m. and triggered the motion alarm, but Spurgeon says the suspect was in and out quickly.

“They were in the building for, whatever, less than a minute. They grabbed all the stuff. They walked — and you can see on the video the cops coming by the front door, and then he just casually looks at the camera, and walks out the back door.”

RCMP were on the scene so soon because a nearby resident who lives up the hill from Urban Distilleries and Winery heard the window being smashed and called 9-1-1.

Officers swept the area, even using a police dog, but the burglar got away.

Spurgeon hopes going public with the video will help identify a suspect.

He says break-ins have been happening more frequently in the area. Business owners in the complex just off Highway 97 at Grizzly Road will be meeting to discuss ways to improve security.

Gardening season has had a slow start heading into the summer season across the Okanagan due to the cooler than normal temperatures.

Maria Byland, owner of Bylands Garden Centre in West Kelowna says business has picked up over the last week as the sun comes out and the weather gets warmer.

“We have been busier, but it certainly was a slow start for the year. I figure that we are two weeks behind, but nature has a way of catching up and the nice thing about this year is that there is intensity in the colours, they are lasting longer because you aren’t really getting that harsh sunshine. So we are hoping to be a longer season,” she said.

Byland says the plants are benefiting from the cooler weather.

“There isn’t that transplanting shock anymore that you would be getting if it was really really hot.”

The most popular items this season have been anything to do with the yard.

“People are spending a lot of time in their yard so deciduous plants, hedging, perennials are very popular, annuals are very popular because that gives you lots of colour through the summer. We are very lucky because we grow our own products and we have got a great selection.”

Since the pandemic, Byland says more people are giving gardening a shot.

“It took COVID for people to realize they can create such a great environment. It is so therapeutic. Nothing is like growing your own vegetables, growing your own beauty. We have certainly seen young families starting to get their kids into gardening, so it is really encouraging because it is really the best for the world,” Byland added. 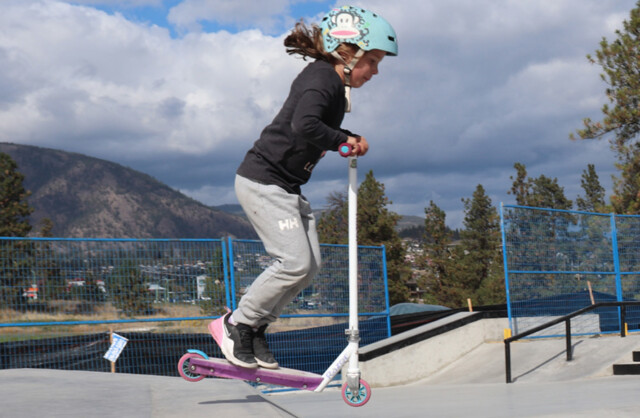 West Kelowna is celebrating the opening of its new skateboard park this weekend.

The official opening is Saturday between 1:30 and 4 p.m. — skateboarders and skateboard enthusiasts of all ages are invited to the celebration.

The park opened unofficially in the fall of 2021 and the site of the old skateboard park is making way for the construction of West Kelowna’s new city hall and library.

“This popular amenity will provide opportunities for all ages and abilities to enjoy and be a welcoming place to gather,” said West Kelowna Mayor Gord Milsom.

The celebration is free and the skateboarding community is invited to enjoy a live DJ, food trucks will be on site along with skateboarding demos and competitions.

A ribbon-cutting was held last fall but an official opening was postponed until after COVID-19 restrictions were lifted.

The new park is near the old location, next to the Johnson Bentley Pool. 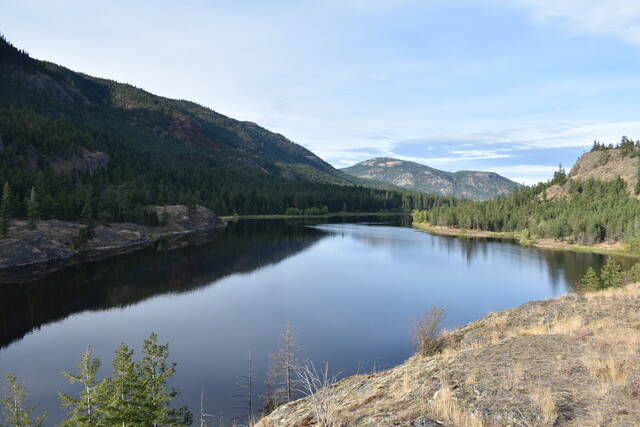 The City of West Kelowna has upgraded the water advisory on the Lakeview-Rose Valley water system to a full boil water notice.

All residents within the service area must now bring water to a rolling boil for one minute for brushing teeth, drinking, making baby formula, preparing food and beverages and ice and washing fruits and vegetables.

The notice is due to increased turbidity in the water, which impacts the performance of the chlorine disinfection process. Bacteria, protozoa, viruses and other microorganisms can attach themselves to suspended particles in the turbid water.

A safe, free, alternate source of water is available at the bulk filling station at Shannon Lake and Asquith Roads. The tap is located on the Asquith Road side of the station.

The notice will stay in place until further notice. An interactive map of West Kelowna water systems is here. 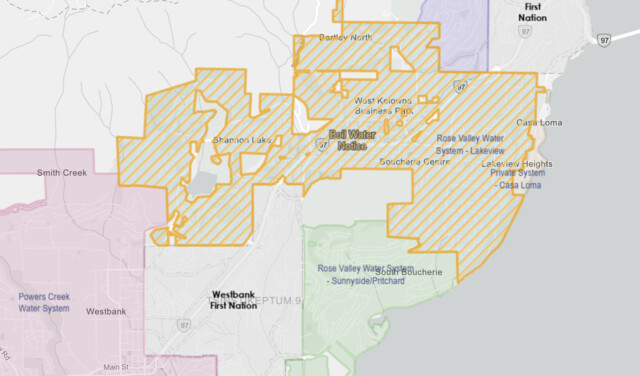 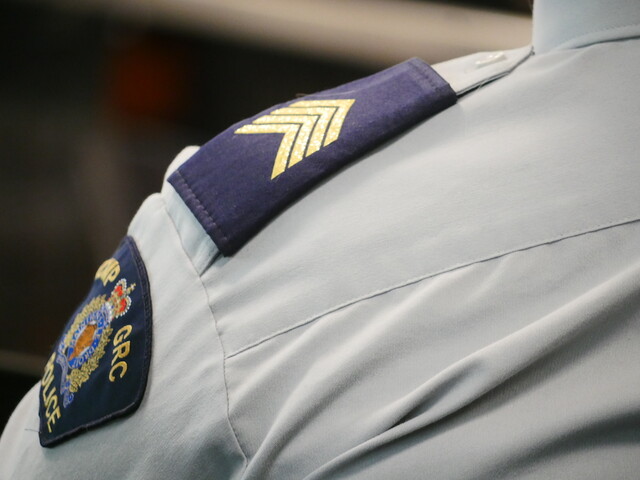 West Kelowna RCMP say they are continuing to investigate the circumstances surrounding the discovery of what turned out to be an explosive device on Bartley Road Thursday morning.

In a news release, the RCMP’s Explosive Disposal Unit, activated from the Lower Mainland, determined the suspicious object was indeed an explosive device.

It was destroyed locally.

RCMP would not specify whether the object was indeed a man-made bomb, stating to “protect the integrity of the investigation, no further details regarding the device will be released at this time.”

A resident of the area told Castanet News she was told the device was a pipe bomb.

Police, out of an abundance of caution, secured the scene until the EDU arrived. Residents were not evacuated, but vehicle traffic was restricted through the area.

The West Kelowna RCMP, EDU and forensic team are continuing to investigate.

If anyone has any information about this incident, please call the West Kelowna RCMP detachment at 250-768-2880.

To remain anonymous please call Crime Stoppers at 1-800-222-8477 or leave a tip online at www.crimestoppers.net