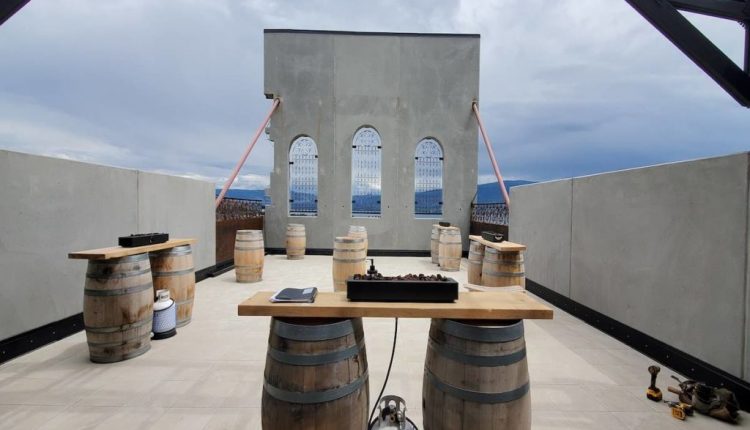 Two local powerhouses in the service industry, are joining forces to create an unrepeatable rooftop patio experience in West Kelowna.

West Kelowna’s Crown & Thieves winery is getting ready to open the doors to its new rooftop restaurant collaboration with Kelowna’s Salt & Brick restaurant (on Bernard Avenue).

The fusion will be called Salt & Thieves.

Emeleigh Brown, operations manager at Salt & Brick and its family of restaurants, has been hard at work putting the project together with hopes to get it open by July 9 (tentative date). A brand new open kitchen is currently being built atop the Crown & Thieves building, with equipment being crane lifted to the roof.

Salt & Brick lovers can relish in the restaurant’s atmosphere with arguably one of the best views in West Kelowna, overlooking endless vineyards.

James Holmes, chef at Salt & Brick, told the Capital News that it was the perfect partnership because these two companies think outside of the box.

“Picture our restaurant, but on a rooftop. If you’re looking at the kitchen, it’s going to feel like you’re sitting at Salt & Brick,” he explained, adding that it will be fused with the distinct Crown & Thieves décor.

Service will start with a tapas menu for the first few hours and then dinner can be ordered as of 4 p.m. – served with any Crown & Thieves wine your heart desires.

Crown & Thieves is one of West Kelowna’s newest wineries. It made waves in early spring when the winery debuted its intriguing 1920s theme – imagined by owner, Jason Parkes. Although, Parkes also has a thing for Renaissance art, taxidermy, and other non-1920s artifacts you can find at the winery. Patrons of Salt & Thieves will see that tied into the rooftop patio.

Salt & Brick has been putting Kelowna’s food scene on the map for years. Just months ago, the restaurant was featured on the Food Network’s Big Food Bucket List. Chef Holmes served up his signature dishes in the episode. In early June, he was on the network’s show called ‘Fire Masters’; a competition cooking show that has three chefs compete using open flames outdoors.

Both trendsetting businesses are one-of-a-kind to Kelowna, and the menu will surely reflect that.

Holmes, known for his edgy dishes, said the food won’t be average fine dining style meals that you would normally find at a winery.

“Both Jason Parkes and I are just going to do what we want and how we want to do it,” Holmes said. “You’re just going to see something completely different for the wine scene in this area.”

Check back to find out when Salt & Thieves officially opens.

Check back to find out when Salt & Thieves officially opens.