Westside Road has reopened to traffic as firefighting crews continue to mop up at the scene of a new wildfire, which was sparked in the West Kelowna area Tuesday.

According to DriveBC, both lanes of Westside Road from Lindley Drive to Traders Cove Road are now clear.

The Central Okanagan Emergency Operations Centre said on Tuesday evening that all tactical evacuation orders have been lifted for properties in Sail View Bay and along Bear Creek Road, north of Parkinson Road.

The fire began Tuesday afternoon when a tree fell on a power line in an area east of Rose Valley Reservoir.

BC Wildfire Service estimates the fire is about three hectares in size.

“Municipal and BC Wildfire Service crews will continue efforts to mop up the fire,” the Central Okanagan Emergency Operations Centre said in a statement.

“For public safety reasons, residents and visitors must remain at a safe distance from the fire and all emergency response activities, which will remain ongoing in the area into Tuesday evening.”

The Central Okanagan Emergency Operations Centre has lifted a portion of the tactical evacuation order for Sail View Bay but it remains in effect for all properties along Bear Creek Road, north of Parkinson Road as municipal and BC Wildfire Service crews continue efforts to suppress a fire burning east of Rose Valley Reservoir.

BCWS estimates the size of the wildfire at three hectares.

Westside Road is re-opened to single lane alternating traffic. Please obey road crews and maintain safe speeds through the area. Motorists should not be stopping along Westside Road to observe or take photos of the wildfire and to allow crews to safely do their work.

For public safety reasons, residents and visitors must remain at a safe distance from the fire and all emergency response activities in the area.

Westside Road has partially reopened around the scene of Tuesday’s wildfire near Bear Creek Road.

According to DriveBC, the route has reopened to single lane alternating traffic.

Tuesday’s wildfire in the vicinity of Westside Road north of Sail View Bay was sparked by a downed power line.

The resulting fire has prompted closure of Westside Road in both directions and the tactical evacuation of as many as a couple of hundred people just off Bear Creek Road.

“We are continuing to work our way around the fire, building a fire guard and ensuring we have a water line around it.”

Brolund expects that work will be completed later this afternoon, at which time they will be able to look at lifting the tactical evacuation order and reopening the road.

“We are asking for their patience, and we will have them back shortly.”

The West Kelowna Fire Department is being assisted by crews from Wilson’s Landing, Kelowna and the BC Wildfire Service.

The backlog of traffic north of the fire on Westside Road has been escorted past the fire by RCMP.

The fire is still smouldering and it is not yet known if road will be reopened shortly, or if police were just allowing vehicles stuck north of the fire out. Westside Road is also closed north of La Casa due to the White Rock Lake wildfire.

Central Okanagan Emergency Operations says all residents located on Bear Creek Road, north of Parkinson Road, including the Sail View Bay subdivision, were asked to tactically evacuate due to the fire.

Westside Road remains closed in both directions near where the fire started.

The BC Wildfire Service says the blaze is estimated to be three hectares in size.

The fire appears to have started when power lines along Westside Road were contacted by a fallen tree.

Castanet has reached out to BC Hydro for comment.

Crews are working the power lines at the side of Westside Road where the fire originated.

The fire is still burning although the smoke has subsided significantly. Crews appear to be gradually getting it under control.

The fire is burning between Westside Road and Bear Creek Road, which has allowed firefighters to access the blaze from both sides of it.

Two helicopters are also hitting the fire from the sky, assisting crews in containing it. 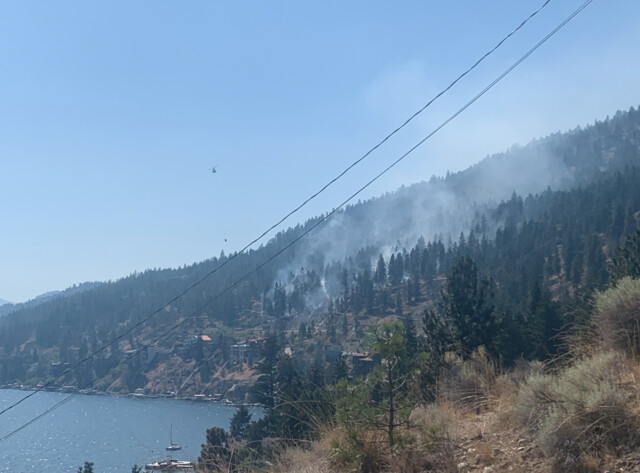 BC Hydro is reporting the power is out to the neighbourhoods surrounding the fire.

The cause of the outage, which has impacted 290 homes, is being listed as a tree down across wires.

It is not confirmed at this time if the tree hitting the power lines is the cause of the wildfire.

People vacationing along Okanagan Lake just south of Bear Creek Provincial Park have been placed on evacuation alert due to a wildfire in the area.

Sabina Martz, who is one of those on vacation, told Castanet News she had just returned from visiting the Kangaroo Farm when they encountered the fire.

“We came home, threw our clothes into a suitcase and we’re ready to go at any moment – very nervous,” she said.

“We’ve been told we are on alert but not on evacuation order yet. We have no water or electricity in the house. We’re thinking we’ve got to go.”

Helicopters from the BC Wildfire Service are on scene.

Emergency crews have closed Westside Road at roughly the 800 block.

The fire is burning up the hillside and away from homes, although some residents very near the blaze have been tactically evacuating.

Air support from the BC Wildfire Service is being called in.

A new fire has erupted on Westside Road.

The fire appears to be burning just off the roadway south of Bear Creek Provincial Park.

The blaze is visible from downtown Kelowna.

Castanet has reporters on the way to the scene and will update. 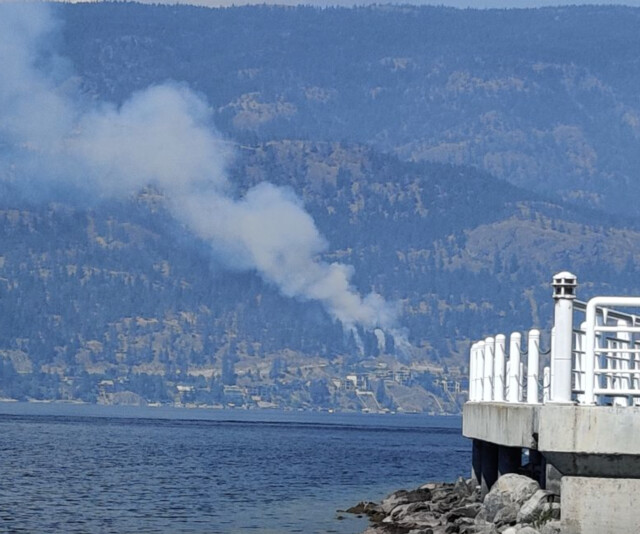 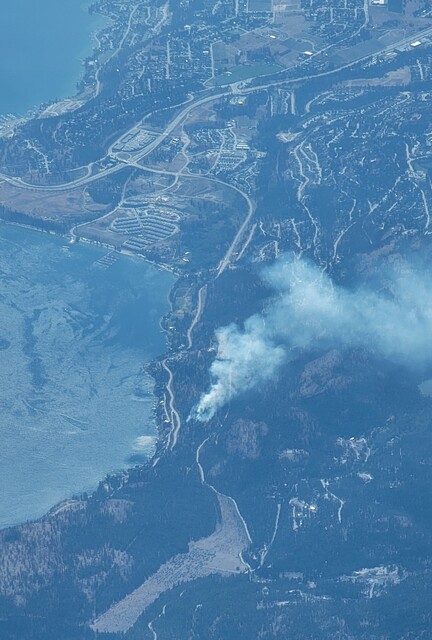 The most effective out of doors parks in Kelowna for canines