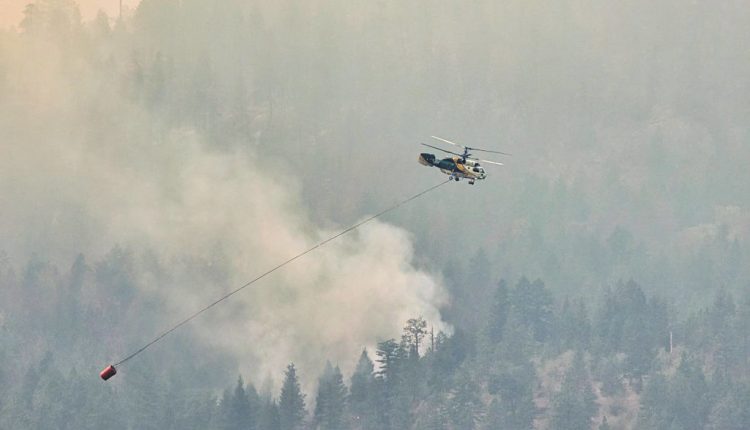 The White Rock Lake Wildfire has continued to burn along it’s edges and into the Fintry Protected Area, as ash and dense smoke have fallen over Vernon and the surrounding area.

Although there has not been substantial movement, the fire is aggressively burning along the perimeter.

The fire has not cross any control lines north of Highway 97 in the Monte Lake area, and is active north of Naswhito Creek.

The heavy smoke grounded most air resources for the fire, with some heavy helicopters working where visibility allowed. The smoke did contribute with some reduced fire behaviour, however winds from the west caused activity to rise along the south flank of the fire.

On Sunday, the ridge is expected to breakdown with strong gusting winds from the south to southwest expected. There will most likely be a significant increase in fire activity Sunday with the forecast weather. Heavy equipment and crews are being moved to priority areas on the fire that are expected to be the most challenging along the north, northeast, and east flanks.

Due to high temperatures, dry conditions and increased winds, fire crews are anticipating an increase in fire activity at the White Rock Lake wildfire over the weekend, according to a Saturday (Aug. 14) update from BC Wildfire Service.

As a result of the weather forecast, BC Wildfire said that heavy equipment and crews are being allocated to priority areas on the fire that are expected to be the most challenging, particularly along the north, northeast and east flanks.

Burning at an estimated size of 58,000 hectares, the fire remains classified as out of control. Evacuation orders and effects remain in place for a number of properties located in:

The Central Okanagan Emergency Operations Centre also said on Saturday that there have been no changes made to the evacuation orders and effects. Based on advice from BC Wildfire, temporary access permits allowing residents to go back into evacuated areas to collect items are no longer likely.

In partnership with BC Wildfire, North Westside firefighters will continue to patrol Westside Road neighbourhoods today.

“They are looking for hotspots and removing combustible materials from around homes in the Valley of the Sun neighbourhood,” said Alex Van Bruksvoort, North Westside fire chief. “There were once again no confirmed reports of structural damage in the area overnight.”